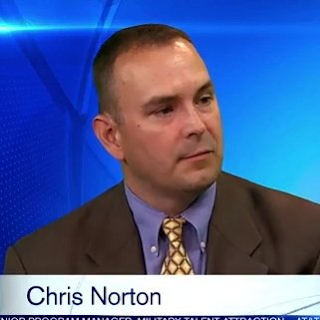 It's customary to pay tribute to Veterans and thank them for their services. There is far more for civilians to learn, though, from recruiters hiring Veterans. Many of them lead the way in our industry because of their deep understanding of what "candidate experience," "candidate engagement," or "candidate interaction" actually mean — and this because Veterans are just like millennials: they are fundamentally hyper-social and hyper-connected. Here is a my conversation with Chris Norton, a Logistics officer in the Army Reserve (18th year) with five years of actual duty time accrued since 9/11, formerly known as the AT&T's "Military Guy," who is now Senior Vice President of Corporate Development at Defense Mobile Corporation.

A recent report shows that for service members after 9/11, entering the civilian workforce has been somewhat harder than for previous generations.

Chris Norton: That's not an untrue statement at all. It's a numbers game. Historically when you had a large standing military as a representative part of the population, odds were pretty good that you would run into somebody along the way in the hiring process who had also served. You didn't need to jump through the hoops you do now to describe your service. The 9/11 service members account for about one half of one percent of the population. In terms of a minority population, you can't get much smaller than that... So you've got a population out there that has a whole different language, an entirely different culture and has some hurdles when it comes to the transition as a result. So recognizing that factor and also recognizing that the last decade has stretched service members to the point where they have all these capabilities and skills and attributes, employers would be nuts not to want them! For example, AT&T had hired 3,600 veterans as of the end of October and they announced that their goal is 10,000 over the next five years.

So, how do you get Veterans?

Chris Norton: If you are going to launch or grow your Veterans' program, you need to get somebody visible and make it personal and social. Service members do not understand transactional logic, but they understand interaction. The transactional nature of recruiting and staffing won't work, particularly so for the military, because we have a mentor and relationship driven environment. The Military is kind of a bubble society, very close-knit. We all look out for each other. It's our culture.

Chris Norton mentioned to me to a remarkable article written by Mike Stajura for Business Insider: What Vets Miss Most Is What Most Civilians Fear: A Regimented, Cohesive Network That Always Checks On You. In essence, what Veterans need is "a new mission, a new purpose, and a strong, supportive social network in which people [are] actually invested in one another’s well-being and success."

Chris Norton: So if you can inject into the process the ability to connect people on an interactive level even if it's not directly tied to the ATS side of the house, and allow people to develop some sort of relationship, that's a real good thing when it comes to recruiting veterans. When you come across as a robot or won't put your name down on it, then it gets discounted.

You go back to the Greeks and Romans about soldiering and the Military: the same stuff comes up. It's amazing. I am reading a book by Bill Mauldin who was a cartoonist during the WWII. Every other page my arm hair is raising up because something is resonating with me 70 years later: observations about service members interacting with each other.

Where we really made inroads at AT&T is that we had personalized the program. I was just using the office-hour component of TalentCircles because that's all I functionally needed. I would bring about 5 people and tell them what I do. "Dudes, loose the tie, loose the jacket. Just relax. We are going to talk here." I set the playing field. We are like a couple of Joes sitting around a beer. "Let's talk about you... What are the kinds of things you want to do.... What's your background... " And we have a honest talk ... I literally go first in first out and tell them "You can drop when you are done or you can hang out and listen to the other conversations."

And the result of engaging with candidates is committed employees....

Chris Norton: Veterans are great employees especially for the type of work that happens to be the growing part of AT&T's business. They are building the network out like gangbusters. They have entry point positions but people move pretty fast through the food chain. Veterans work independently, can learn new processes, new languages, new cultures, new systems — things that are all part of the basic training in the military. These are people who have already proven they can do it. Retention beyond two years for veterans is considerably higher — high enough to turn heads within any business.

Next post on hiring Veterans: An army recruiter changed my life forever: Conversation with Caleb Fullhart
Posted by TalentCircles at 9:03 AM