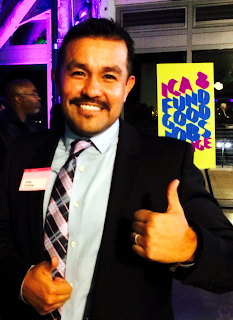 Jose Corona became the CEO of Innercityadvisors (ICA) in Oakland, CA, a little over ten years ago, and every year he becomes even more passionate about the mission of his organization. As summarized on their website: “ICA works tirelessly with entrepreneurs, advisors, employees and sponsors to create a more equitable and impactful economic ecosystem in the Bay Area. Our unique approach has developed many amazing companies who have created good jobs for local residents."

Jose has three of the most critical features of social entrepreneurs: Personal commitment to a cause, team-building capabilities, and result-orientation.

Personal commitment to a cause:
Social entrepreneurs see the world around them and passionately want to transform it. For Jose Corona, social entrepreneurship deeply resonates with his own upbringing. When I asked him why he is doing what he does, his first reaction was to speak of his dad, who came from Mexico as a teenager to be a seasonal worker in Watsonville, CA, then ended up buying a piece of land there, creating his own strawberry farm and bringing over his family. "It was truly through his entrepreneurship spirit and how he tried to live the American dream that I asked myself how I could support businesses like my dad had.  I saw firsthand how he gave opportunities to others or helped others start their own business, family members and also some friends of his. Working with companies to create employment I feel like I am very much in line with these values I learned early on as a young boy: what people want is opportunities. They do not want handouts."

Jose's cause is to help people get jobs to be part of a community and strengthen the identity of that community. Dedicated social leaders understand that it's not because a company is located in an inner city area that it will automatically help the development of that community. "We actually found the opposite," Jose notes. "Most of these companies were relocating here, whether it was East Oakland or West Oakland because it was cheaper real estate. It was a business decision for them; it wasn't that they wanted to support E. or W. Oakland; only 27% of the employees were from the community. So we made the conscious choice to really work with entrepreneurs who are committed and have the values of the community. In a five-year period we turned that around to go from 27% to 73%. Our companies hire locally. The majority of the business owners are actually not from the community but what they are committed to is actually hiring from the community." How do you manage this? By bringing people together.

Team-building capabilities
ICA was founded in 1996 by Michael Porter as a project to revitalize distressed urban communities. It included Baltimore, Boston, Kansas City, Milwaukee, and Oakland. The Oakland branch is the only surviving entity, and it operates in dense communities primarily composed of Hispanics (40%) and African-Americans (30%) where graduation rates from high school are low and the poverty rate is about 20% higher than in the surrounding metropolitan area. "We made it work here," Jose says. Quite humbly, he emphasizes the fact that ICA is blessed with having a great entrepreneurial culture and socially responsible entrepreneurs in Oakland and in the Bay Area.

The key piece of the model, he underlines, "is that we have advisors, mentors and volunteers, in other words professionals with experience in growing a business. How do you bring the right tools and people to accelerate that path to growth?" That's obviously the hard part... because ultimately, and despite the gigantic resources of the Silicon Valley, there are actually very few initiatives comparable to ICA. This is where the exceptional wisdom and continuous involvement of a committed leader does make a difference: "We were able to figure it out. We were able to figure out how to match the right entrepreneurs with the right advisors the right touch, the right expertise, the right experience to have the right impact and help the entrepreneur grow their business."

Jose is a born matchmaker, and part of that rare breed of recruiters who are able to select the perfect role models for new business owners. Talent is the glue of communities, and the key to success is ICA's talent management program:  "It connects people to jobs and people want to keep engaged. Companies do not want to exit our portfolio because they see the value." They feel compelled to give back. "Once the entrepreneurs start to see the value they realize 'you helped me, I want to help you too.'  You can become a mentor to an entrepreneur at an ealier stage. Now we have companies like Revolution foods and Blue Bottle that can give back." Just like leading social entrepreneurs, Jose is a "mass recruiter of local changemakers," to use an expression coined by Ashoka.

Result orientation
Success breeds success. Social responsibility isn’t just the dream of making a difference, it's the ability to change the world for the better, one place at a time through focus and attention to results.

ICA is selective in the companies they support: "We take a lot of time in our due diligence process and are very careful in picking the right characters beyond looking at financial viability; we spend a lot of time trying to understand the entrepreneur. Do you want our services just because they are free or do you want them because you see the real value and will contribute to our mission? " As a result, some segments are more relevant than others. "We started to focus on particular industries such as consumer products, manufacturing, transportation, solar installations because the people running these businesses really value the community where they operate. Also, in these industries, people get opportunities in entry level positions and then advance their career within that company. We have many stories where someone started with working on the floor and five years later, became an operation manager. Giving a job is not enough, career path opportunities is paramount.”

Social entrepreneurs are all about the practical implementation of their vision. The ICA's accomplishments are nothing short of being stunning. "Over my 10 years we have seen around 2,000 companies and we have only taken 45." How many of those have failed? Jose paused. "I can count two," he said. "One of them actually didn't fail but got acquired and moved to Redwood City. They took the talent with them. It was a success financially, but the jobs were lost here. The second one was a real failure.”

The size of these companies varies; exponential growth is not necessarily the goal. “Revolution Foods is an exception – and grew from two people to 1,300 and from zero to 100M in revenue. The rest of our companies are companies that are sustainable and have anywhere between five to 50 or 100 employees. They are the typical SMBs that constitute the actual texture of our economy. ICA created 6,500 jobs over 10 years and 2700 in 2,013 alone.

What's next for Jose? Maybe the same work on a larger scale, without, however, diluting the vision and the mission: "Where we are now and how we sustain this movement is something that we are thinking about. How do we make a larger impact?” No doubt we’ll hear more about Jose Corona's pragmatic idealism and persistent ambition to positively impact the lives of people!

Posted by TalentCircles at 9:06 AM