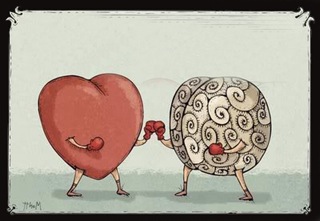 "We can walk our road together
If our goals are all the same.
We can run alone and free
If we pursue a different aim.
Let the truth of love be lighted,
Let the love of truth shine clear.
Sensibility, armed with sense and liberty,
With the Heart and Mind united in a single perfect Sphere."

--Neil Peart, The Sphere: A Kind of Dream

Again with the Millennials and Generation Y. Those were the first words out of his mouth and I immediately became polarized to my previous points of Generation Now.

The ones about treating everyone non-generationally and talking with them straight. That being passionate about what you do is one of the most important tenets of the world of work, ever, regardless of when you were born. That today we’re not only loyal and committed to the work that moves and schools us, but also to the people who are part of that committed work — because that’s the work that moves us to do greater things for the world.

That’s the work that makes it easier for startups to start up and for established companies to grow — creating new jobs and replacing some of those lost over the past five years, including full-time, part-time, flex time, contract, and project work, and any combination of those and more that you can imagine. That’s the work that transforms technologies, processes, communities, and the very heart and soul of the world.

At least that’s what thought at first listening to Malcolm Gladwell’s keynote at this year’s SHRM Conference & Exposition in Atlanta. Because he said, “Let’s talk about Millennials.”

But that’s not where he went at all. In fact, speaking of being “moved and schooled” in the end, I certainly was. No, where he went was talking about two generational differences that do exist – and should co-exist.

Which isn’t really a good or bad thing, because they’re two very different worldviews that have changed dramatically the way we participate in the world of work yesterday and today. On the one had you’ve got the traditional top-down management structure that according to Malcolm began to break down in the 1970’s when individuals began to demand more ownership over their career aspirations (and paychecks). And then on the tail end of my generation, Gen X, those born in the 1980’s and 1990’s found knowledge and power in the collective, their personal and professional social networks that upended the top-down structure.

But the amorphous nature of open networks versus the structured leadership of a strong few – the differences between the succinct success of Civil Rights movement and the oblique success Occupy movement in the examples that Malcolm shared – tells a tale of two separate states of mind and heart. However, when combined, it’s a force to be reckoned with. Think different. Think Apple – open social networks internally run by a formidable dictator and brilliant business mind.

Apply this strategy to your open talent networks, the ones made up of new candidates, current employees, management and the like – the ones you’re sourcing from for any position current or future. But manage the networks with structure and direction and sound leadership, however you decide to do it.

Embedding hierarchy into open networks makes for magic, uniting hearts and minds. That’s what truly transforms technologies, processes, communities, and the very heart and soul of the world of work.
Posted by TalentCircles at 10:40 AM